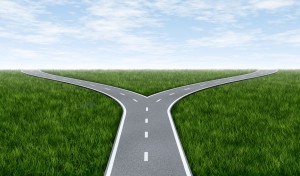 We all face a dilemma many times during an average day. Usually our choices are based on a mixture of sense, impulse and habits. What clothes do you choose to wear? What do you eat for dinner? When do you go to bed?

In other more crucial issues it often feels very important to make the right decision. The possibility of choosing wrong may be daunting and may discourage you from deciding at all.

One woman was married to a man she no longer loved as he had exposed her to daily psychological violence for 15 years. Another woman could not decide whether she could forgive her boyfriend who had been cheating on her for a long time. A man was stuck in a job that was far below his level of competence for 10 years.

I cannot and will not decide for you. Nor will I try to get you to make your decisions before you are ready for it. What I can help you with is to achieve the clarity and determination that makes you able to make your own decisions.

I was contacted by a man who had a really good job, was happy and had a promising career.

His problem was, however, that his job and career opportunities demanded that he lived in Jutland. His girlfriend, his apartment and his life was in Copenhagen.

I asked him to imagine the two options one after the other and notice what happened in his body. As he was a rational man and not used to noticing what he felt, it took some time to make him consider what felt right. After he succeeded in getting in touch with his feelings, he described to me how the first option felt like a heavy lump in the stomach, while the second option felt like a nice tickling in the stomach. After that he was no longer in doubt as to what he should choose.